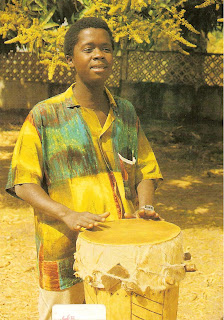 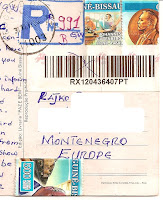 Guinea-Bissau was the Portuguese colony of Portuguese Guinea in the 19th century. Upon independence, declared in 1973, the name of its capital Bissau was added to the country's name to prevent confusion with the bordering Republic of Guinea. It has a political instability since gaining independence and no elected has successfully served a full five-year term. Only 14% of the population speaks the official language, Portuguese. A plurality of the population (44%) speaks Kriol, a Portuguese-based creole language, and the remainder speak native African languages. The main religions are African traditional religions and Islam, and there is a Christian (mostly Catholic) minority. The country's per-capita gross domestic product is one of the lowest in the world. Thanks Iaia!
As you can see there are some unusual postmarks and labels on the back of this postcard. All three stamps used are bent, probably in order to fit in the available space on the postcard. :( Also, there is a label showing it was sent by registered mail (?!). This 'R' mark in probably a number of registered parcel in Bissau (No991B GW). Moreover, the black postmark is of a post office in Belgrade, Serbia (the card was probably missent there as I often receive mail missent to Serbia). This card definitely had a very interesting trip from Guinea-Bissau to Montenegro. :)
Posted by Rajko at 1:45 PM 18 comments: 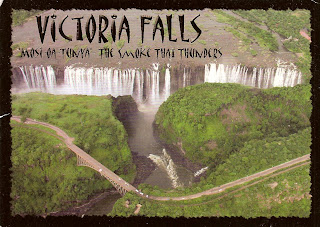 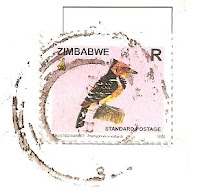 Scenes so wonderful, must have been gazed upon by angels in their flight. - Dr. David Livingstone (1855)

A majestic view of the Victoria Falls in Zimbabwe. You can see a bridge that is very famous - it crosses the Zambezi River just below the Victoria Falls and is built over the Second Gorge of the falls. As the river is the border betweeh Zimbabwe and Zambia, the bridge links two countries and has border posts on the approaches to both ends, at the towns of Victoria Falls, Zimbabwe and Livingstone, Zambia. Many thanks to Luk!
Posted by Rajko at 1:27 PM 4 comments:

Email ThisBlogThis!Share to TwitterShare to FacebookShare to Pinterest
Labels: Zimbabwe

Email ThisBlogThis!Share to TwitterShare to FacebookShare to Pinterest
Labels: Turkmenistan 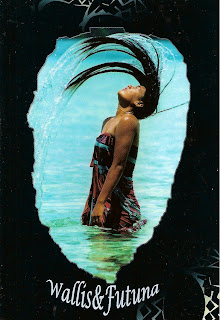 I already wrote general information about Wallis and Futuna; now I'll write about some interesting facts regarding gender role and statuses in Wallis and Futuna. Men and women work together in the fields. Work in the home is shared among the sisters and wives of brothers, so that mothering is a joint acitivity. Often Grandmothers are the care takers during the day if the women of the household are employed or are drawn away from the village by church activities. Meen cook outdoors, while women cook indoors. Few women run for public office, but many women hold senior posts in government and in the community. Women's status as sisters gives them higher rank than their brothers within the family. Oldest sisters in particular are honored, but as wives, however, they are expected to be subservient to their husbands. If you want to read more, check out here. Many thanks to Jean-Pierre for superb card, stamps and cancellations!
Posted by Rajko at 12:55 PM No comments:

Email ThisBlogThis!Share to TwitterShare to FacebookShare to Pinterest
Labels: Wallis and Futuna 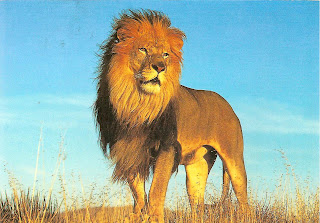 There are over 260 species of carnivorans, the majority of which feed primarily on meat. They have a charasteristic skull shape and dentition. Today they live in the northern parts of Togo. Many thanks to Madeleine from Guinea who went on a business trip to Togo. She says Togo is a very beautiful country, although she only saw the capital Lome.
Posted by Rajko at 12:41 PM 3 comments:

Email ThisBlogThis!Share to TwitterShare to FacebookShare to Pinterest
Labels: Togo 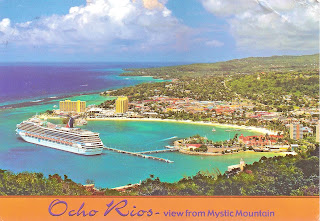 Ocho Rios is a town in the parish of Saint Ann on the north coast of Jamaica. Although he landed in many spots along the Jamaican coast, many beleive that Christopher Columbus first set foot on land in Ocho Rios. Just outside the city, travelers and residents can visit Columbus Park, where Columbus supposedly first came on land and see maritime artifacts and Spanish colonial buildings. It was once a fishing village but now caters to tourists. Thanks Trupti!
Posted by Rajko at 12:30 PM 3 comments:

Email ThisBlogThis!Share to TwitterShare to FacebookShare to Pinterest
Labels: Jamaica 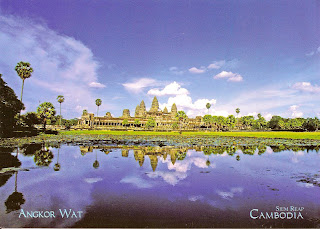 Angkor Wat is the largest Hindu temple complex and the largest religious monument in the world. The temple was built by King Suryavarman II in the early 12th century as his state temple and eventual mausoleum. The temple is at the top of the high classical style of Khmerarchitecture. It has become a symbol of Cambodia, appearing on its national flag, and it is the country's prime attraction for visitors. Spasibo Sergey!
Posted by Rajko at 12:24 PM No comments:

Email ThisBlogThis!Share to TwitterShare to FacebookShare to Pinterest
Labels: Cambodia 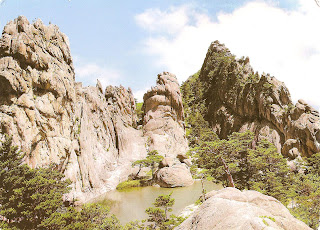 Mount Kumgang has been known for its scenic beauty since ancient times and is the subject of many different works of art. It has many different names for each season, but it is most widely known today in the Korean language as Kumgangsan. More than 12,000 picturesque stone formations can be found there, as well as many lagoons and waterfalls.
Many thanks to Chingtung who was visiting North Korea!
Posted by Rajko at 11:31 AM 2 comments: